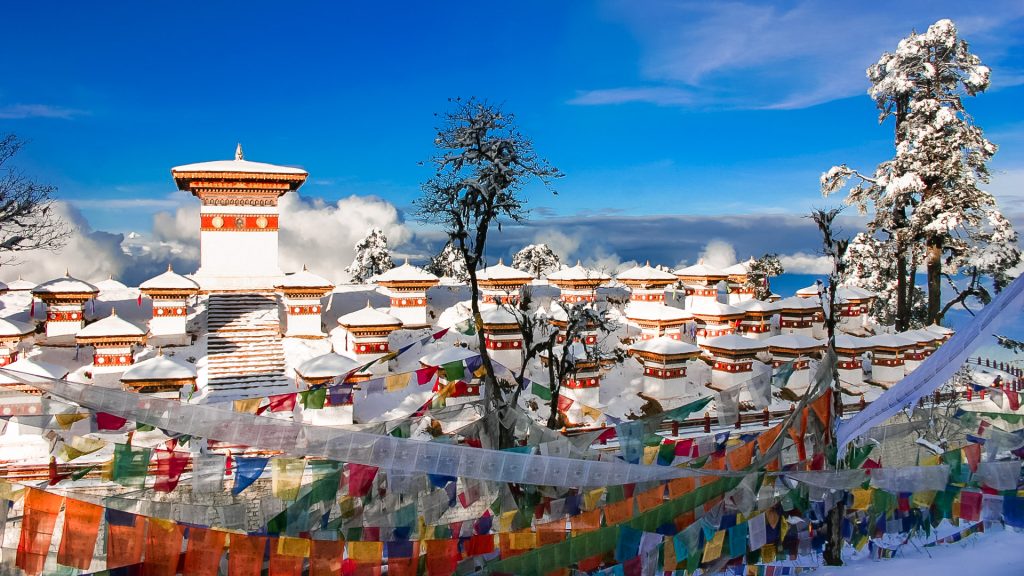 The beautiful valley of Paro encapsulates within itself a rich culture, scenic beauty and hundreds of myths and legends. It is home to many of Bhutan’s oldest temples and monasteries, National Museum and country’s only airport. Mount. Chomolhari (7,314m) reigns in white glory at the northern end of the valley and its glacial water plunge through deep gorges to form Pa Chhu (Paro River). Paro is also one of the most fertile valleys in the Kingdom producing a bulk of the locally famous red rice from its terraced fields.
The flight to Paro is considered one of the most spectacular flight experiences in the world.  While flying in and out of Bhutan, one can see Mt. Everest, Kanchenjunga, Makula, and other high peaks such as Jumolhari, Jichu Drakey, and Tsrim Gang. You will be received by representative of Best Bhutan Travel at Airport.

Thimphu is a small, charming capital city nestled in the heart of the Himalayas with a population of about 100,000 people. Thimphu is capital town of Bhutan and the centre of government, religion and commerce. It is a unique city with unusual mixture of modern development alongside ancient traditions. Although not what one expects from a capital city, Thimphu is still a fitting and lively place. Home to civil servants, expatriates and monk body, Thimphu maintains a strong national character in its architectural style.

Check into hotel, have some refreshment and visit the following Places:

Cheri Monastery was established in 1620 by Zhabdrung Ngawang Namgyal. The monastery is now a major teaching and retreat center of the Southern Drukpa Kagyu sect. The Monastery serves as the monastic school for study of Buddhist Philosophy, metaphysics, mathematics, poets and many other Buddhist studies. According to legend or history of Bhutan the place was first visited by Padmasambhava in the 8th century. In the 13th century it was visited by Phajo Drugom Zhigpo the Tibetan Lama who first established the Drukpa Kagyu tradition in Bhutan. Zhabdrung spent three years in strict retreat at the monastery and stayed for many years.

Picnic lunch will be arranged. Visit following places after lunch:

Drive to Punakha after breakfast

Punakha served as the capital of Bhutan during the time of Zhabdrun Ngawang Namkgyal, the founder of Bhutan. Today it is the administrative and religious center of the district and the winter home of Bhutan’s Central Monk Body. It is blessed with temperate climate and owing to its natural drainage from Pho Chhu (male) and Mo Chhu (female) rivers, the Punakha valley produces abundant crops and fruits.

Start your morning by enjoying and taking pictures of the Dochula Pass (3150m/10,000ft) with its panoramic views of the Himalayas.  The pass is decorated with 108 Druk Wangyel Chorten, which were built to celebrate the stability and progress, brought to Bhutan by His Majesty Jigme Singye Wangchuck, the Fourth King.

After breakfast, hike or drive to Khamsum Yulley Temple. Khamsum Yuelley Namgyel Chorten is 30 meters (100 feet) tall and can be seen in the distance when driving or walking up from the footbridge towards the lodge. The three-leveled chorten took eight and a half years to build and was consecrated in 1999. It is dedicated to the 5th King and serves to protect him as well as the country. It is therefore filled with every form of colorful protector imaginable. The hike there is about 45 minute – 1 hour round trip.

Picnic lunch or lunch in a local restaurant.

After lunch, drive to Kabisa which is about 15kms away from Punakha and explore Kabisa geog (village, school etc). Settle into Chorten Nynpo Monsatery in Kabisa. There are about 50 monks in this monastery. Interact with the monks. Get a glimpse of the monastic lifestyle.

Drive to Paro after breakfast. En-route visit the Lamperi Botanical Gardens – The garden is located in the center of a 47 sq. mile botanical park (35km from Thimphu) and has over 46 species of rhododendrons flowers.

Afternoon: Continue your journey towards Paro and visit following places

Bhutan’s most scenic icon or the most important landmark, Taktshang the Tiger’s nest clings to the side of a steep cliff 300 meters above the Paro valley. The place was first visited by Guru Rimpoche, founder of the tantric form of Buddhism in Himalayan countries, in the 8th century.  It was said that he meditated there for about three months.  The original temple was built in the 17th century, but tragically, it was consumed by fire in 1998.  Like a phoenix, the temple was rebuilt to its fullest glory in 2003.  Takshang is considered to be the 10th-holiest site in the Buddhist world. You can visit three different temples inside the main Takshang complex. Riding Ponies provided upon request.

After breakfast, transfer to Paro airport for departure

We are associated with: